Research to be presented at the 2021 American Academy of Pediatrics National Conference & Exhibition revealed that most injuries were superficial, but fractures and dislocations also were common

ITASCA, IL – In a nationwide study, a team at Children’s Hospital of Philadelphia investigated golf cart-related injuries in children and adolescents and found the number of injuries has increased to more than 6,500 each year in the past few years, with just over half of the injuries in those ages 12 and younger.

The study, “Nationwide Injury Trends Due to Motorized Golf Carts Among the Pediatric Population: An Observational Study of the NEISS Database from 2010-2019,” to be presented at the virtual American Academy of Pediatrics National Conference & Exhibition, also assessed injuries based on sex, type of injury, injury location, injury severity, and event associated with the injury.

During the nearly 10-year study period, researchers found a total of 63,501 injuries to children and adolescents from golf carts, with a steady increase each year.

“I think it's important that we raise awareness of the severity and types of injuries that golf carts pose to children including pre-adolescents, so that greater prevention measures can be instituted in the future,” said Dr. Theodore J. Ganley, director of CHOP’s Sports Medicine and Performance Center and Chair of the AAP Section on Orthopedics.

Over the past decade, motorized golf carts have become increasingly popular and more widely available for recreational use at a variety of events. Regulations vary from state to state, but many places allow children as young as 14 to operate these vehicles with minimal oversight, paving the way for injury. In addition, children riding in golf carts driven by others can be thrown out and injured, or they can be seriously hurt if a golf cart rolls over.

Because of this troubling trend, researchers determined it was necessary to expand on previous reports exploring golf cart injuries from earlier time periods and to examine current injury patterns. In their new analysis, the researchers found:

The updated data can be used to improve safety guidelines and regulations to help prevent injuries from motorized golf cart usage, especially in an at-risk pediatric population, the authors urge.

To request an interview, journalists may contact Kaila M. Revello at CONTIKM@chop.edu.

Please note: Only the abstract is being presented at the meeting. In some cases, the researcher may have more data available to share with media or may be preparing a longer article for submission to a journal.

The American Academy of Pediatrics is an organization of 67,000 primary care pediatricians, pediatric medical subspecialists and pediatric surgical specialists dedicated to the health, safety and well-being of infants, children, adolescents and young adults. For more information, visit www.aap.org.

Abstract Title: Nationwide Injury Trends Due to Motorized Golf Carts Among the Pediatric Population: An Observational Study of the NEISS Database from 2010-2019

Over the past decade, motorized golf carts have increased in their availability for recreational use and usage at a variety of events. Current regulations allow children, adolescents, and young adults to operate and ride these vehicles with minimal oversight, paving the way for an increasing amount of injuries especially in the pediatric population. Because of this troubling trend, it is necessary to expand on previous reports exploring golf cart injuries from previous time periods and critically examine current injury patterns. This study aims to analyze injury trends due to golf cart injuries over the past 10 years among the pediatric population and further characterize the nature of these injuries

The National Electronic Injury Surveillance System (NEISS) database was queried for all golf cart injuries occurring in the pediatric population (≤21 yo) from the years of 2010-2019. Inclusion criteria was data within the time frame of the study, individuals ages 0-21, and injury diagnosis codes 50, 53, 54, 55, 57, 58, 59, 63, 64, and 66. Exclusion criteria was any data outside the time frame of the study, individuals >21 years old, and non-applicable injury codes. The data was analyzed by descriptive statistics such as mean and standard deviation for continuous variables, percentages, and frequencies for categorical variables. Appropriate NEISS sample weights were applied for estimating national injury rates.

As the incidence of golf cart related injuries continues to rise and their accessibility increases proportionately, improved safety guidelines and regulations should be considered in hopes of preventing these common injuries, especially in an at-risk pediatric population. 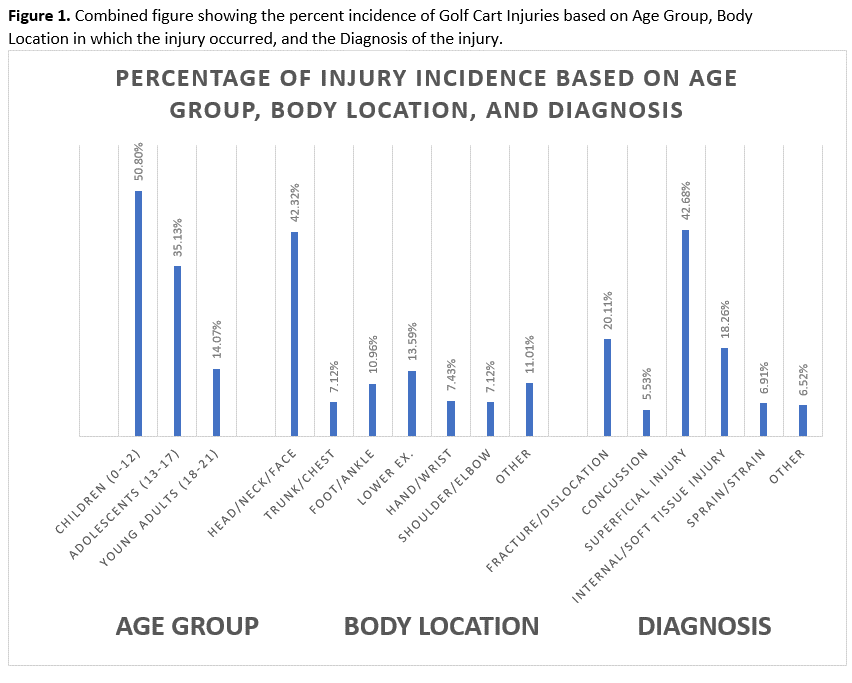 Combined figure showing the percent incidence of Golf Cart Injuries based on Age Group, Body Location in which the injury occurred, and the Diagnosis of the injury 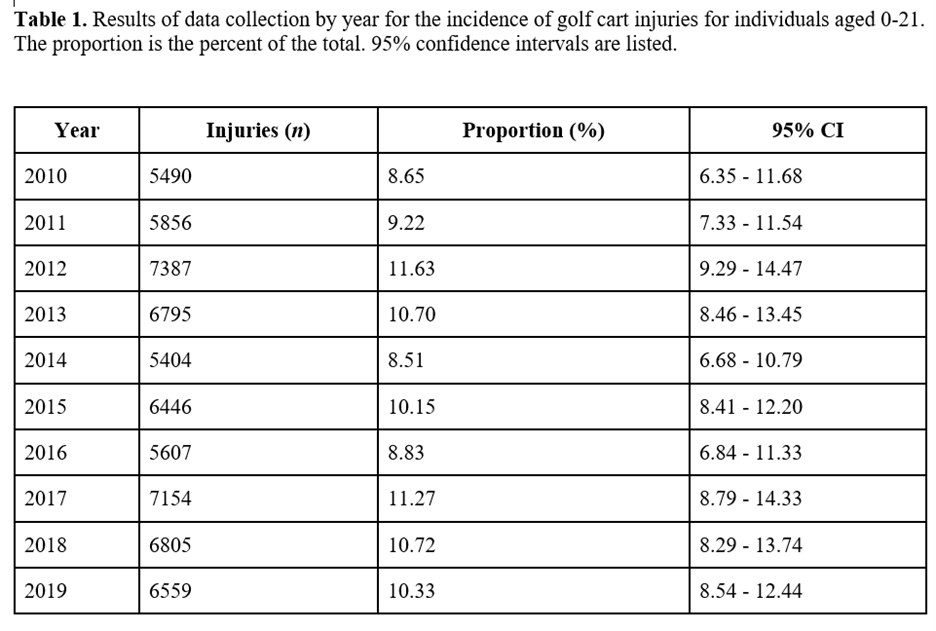 Results of data collection by year for the incidence of golf cart injuries for individuals aged 0-21. The proportion is the percent of the total. 95% confidence intervals are listed