Why Should Pediatricians Ask About Guns in the Home? 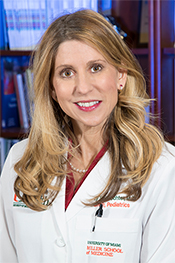 When we don’t ask, children are shot. Nearly every day.

As lethal as bullets are, many of these kids die. Twice as many live, but they are never the same. They are traumatized emotionally and physically. They are missing an eye, missing an ear, missing parts of their brain. They can’t walk. They can’t talk. Their lungs are scarred. They need trachs to breathe and get recurrent pneumonias. They need catheters or ostomy bags. They don’t go back to school. They get started on opioids, and become addicted.

When we don’t ask, children — toddlers and teenagers — ​shoot themselves. They also shoot their siblings, their cousins, and their friends. They don’t mean to. What do they then do with that guilt? Who is responsible for that?

It would be easy to believe that gun injury isn’t a pediatric problem, but that’s not true. There are more gun deaths than death from cancer, HIV or blood infections. It would be nice to believe that homes are safer with guns, but that’s not even remotely true, as has been evidenced time and again, since the landmark “Protection or Peril” study in 1986. In 2015 alone, Centers for Disease Control and Prevention data show there were more than 3,400 unintentional gun injuries among US ​​youth age 20 and younger — 111 of them fatal.

That is why the American Academy of Pediatrics (AAP) recommends that pediatricians routinely discuss firearm safety with patients and families to prevent injury.

​"The study supports prior research indicating that gun owners with children tend to underestimate the dangerous combination of firearms in the home and a child’s natural curiosity."​​

The need for such conversations became clear yet again with a new study in Hospital Pediatrics showing nearly 40 percent of gun-owning parents wrongly believed their children did not know where their household gun was stored. In addition, 22 percent of parents incorrectly thought their children had not handled that gun. The study supports prior research indicating that gun owners with children tend to underestimate the dangerous combination of firearms in the home and a child’s natural curiosity.

For the past six years, pediatricians had to fight for the right to keep kids safe – to talk with patients and families about firearm safety – after Florida passed what was known as the “physician gag law.” In this legislation – which was never actually enforced due to an immediate injunction by the courts -- the State of Florida attempted to limit physicians from screening for firearm access which might put children and others at risk for injury. This violated physicians’ First Amendment right to freedom of speech, and patients’ rights to hear speech. With the help of the Florida Chapter of the AAP, several physician litigants, and pro-bono attorneys including Ropes and Gray, the Brady Group, Edward Mullins, and Amicus groups, the law was overturned in a ruling in the U.S. Court of Appeals for the 11th Circuit, which deemed it unenforceable.

​"Pediatricians are at the front line to advocate for firearm injury prevention."​​

We will never know how many families might have been spared the tragedy of gun injuries during this period. Despite the law’s injunction, misperceptions about legal challenges may have had a chilling effect on conversations in the pediatrician’s office that can help prevent these injuries.

In the final ruling of Wollschlaeger v. Governor of the State of Florida, physicians can ask or record information about firearms. There is no penalty for that and no legal action for what was described as unnecessary harassment. This ruling is an important victory, as freedom of speech in an exam room is essential as a right – critical to our practice, and necessary to provide safe care for children.

Pediatricians are at the front line to advocate for firearm injury prevention. As research continues to show, we can’t assume parents don’t need help understanding what children know and don’t know as young brains develop, or how to better protect them.

We need to ask.

Judy Schaechter, MD, MBA, FAAP, who served as a litigant in Wollschlaeger v. Governor of the State of Florida, is an elected member of AAP’s Council on Injury, Violence and Poison Prevention and an appointed member of the council’s subcommittee on violence prevention. She is a professor and chair of the Department of Pediatrics at the University of Miami Miller School of Medicine, chief of service at Holtz Children’s Hospital at Jackson Memorial Medical Center, and past president of the national Injury Free Coalition for Kids.

Free posters, brochures and other material for ASK Day 2017