Research to be presented at the 2022 American Academy of Pediatrics National Conference & Exhibition found that race and education levels are linked to how prepared the families are for wildfires.

In contrast, having a child with an underlying breathing issue increased household wildfire preparedness.

The “Characterizing Disparities in Pediatric Household Preparedness for Wildfire Disasters” study took place after a record-breaking year of wildfires in 2020 that burned millions of acres in California. Children are extremely vulnerable during disasters because they often rely on others for care, developmentally may not understand danger or how to protect themselves, and are especially sensitive to pollutants found in wildfire smoke. The authors found that there are disparities in how much preparation individual households have for wildfires and reducing wildfire smoke exposure. Many of these disparities hit home the hardest in communities with less education or with minority populations.

Cross-sectional surveys and qualitative interviews were used by the researchers among parents or caregivers seeking care at Children’s Hospital of Los Angeles. Less educated caregivers (defined as high school education or less) were 97% less likely to report taking actions to prepare for wildfires and 76% less likely to have action-based preparedness compared to more educated caregivers.

The study also found that households were less likely be prepared if they were multiracial or of Hispanic/Latino race, lacked homeowner’s insurance, or had a lack of trust in local authority to assist with wildfires. Households had higher odds of being prepared if they had a child with a breathing issue.

“Previous studies have shown that minority and low socioeconomic populations are disproportionately affected during disasters,” said Dr. Natasha Gill, Assistant Professor of Clinical Pediatrics at the University of Southern California Keck School of Medicine, and the lead author of the study. “We also know that wildfires and exposure to pollutants in wildfire smoke can cause severe breathing issues, especially in children. No matter a child’s socioeconomic or racial background, we want all children to stay healthy and safe during wildfire disasters. This study shows that disparities for wildfire preparedness do exist in households with children. If we can find a culturally appropriate way to educate families about how to prepare their household for wildfire disasters, we can promote resilience and improve health outcomes during these unpredictable events.”

Wildfires are unpredictable and becoming more frequent and destructive around the world. Knowing wildfires disproportionately affect resource-limited areas and minority populations, children in these communities face the greatest risk of having not only poor health outcomes but also housing loss, displacement, and long-term mental health issues.

Dr. Natasha Gill is scheduled to present an abstract of the study, available below, from 12:35 p.m.- 1 p.m. PT Monday, Oct. 10 during the Council on Children and Disasters session at Anaheim Convention Center, 263AB. To request an interview with Dr. Gill or another abstract author, journalists may contact Dr. Gill at ngill@chla.usc.edu or Ellin Kavanagh at ekavanagh@chla.usc.edu.

Please note: Only the abstract is being presented at the meeting. In some cases, the researcher may have more data available to share with media or may be preparing a longer article for submission to a journal.

The American Academy of Pediatrics is an organization of 67,000 primary care pediatricians, pediatric medical subspecialists and pediatric surgical specialists dedicated to the health, safety and well-being of infants, children, adolescents and young adults. For more information, visit www.aap.org. Reporters can access the meeting program and other relevant meeting information through the AAP meeting website at http://www.aapexperience.org/

NOTE FOR REPORTERS: THE AUTHOR HAS UPDATED DATA THAT IS AVAILABLE UPON REQUEST.

Climate change has increased the threat of more frequent, destructive wildfires. Wildfires disproportionately affect minority and low socioeconomic communities and increase respiratory morbidity, especially in children. Though health disparities among minority children are likely to be compounded during wildfires, limited studies describe this phenomenon. This study aims to characterize disparities in pediatric household preparedness for wildfire disasters and identify targeted education and dissemination strategies for this population.

Data were obtained using a novel questionnaire and semi-structured interview administered in real-time to English or Spanish-speaking caregivers (n=70) presenting to a Pediatric Emergency Department in Southern California that serves large minority populations and patients in high-risk wildfire zones. Each investigation tool was reviewed by subject matter experts and piloted with real patients for content, comprehension, and literacy before data gathering. Logistic regression models and Fisher’s exact test were used to assess the crude association between household/child demographics, socioeconomic factors and the following outcomes: [1] Resource-Based Preparedness (RBP: summation of thirteen material-related questions); [2] Action-Based Preparedness (ABP: summation of five action-related questions); [3] Overall Preparedness (OP: summation [1] and [2]); and [4] Preferred dissemination mode and format for wildfire preparedness education. A household was considered to be prepared if 50% or more criteria were reported. 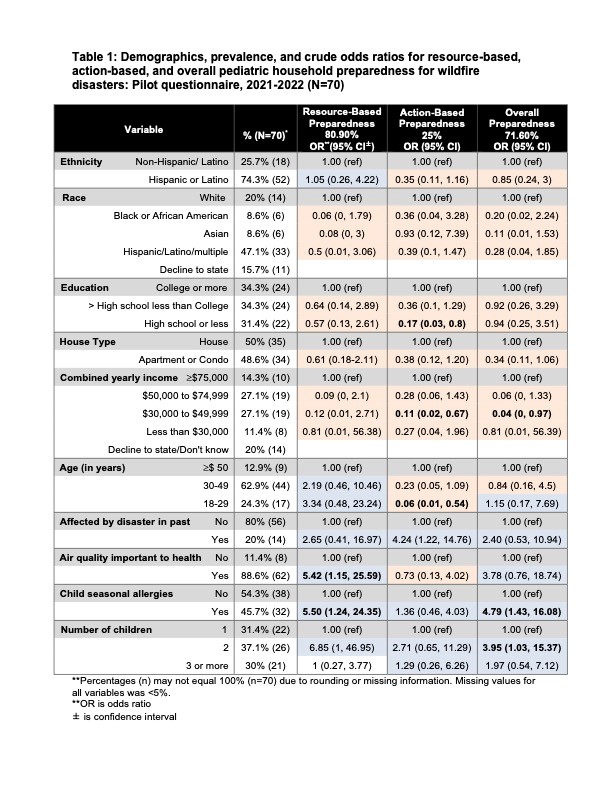 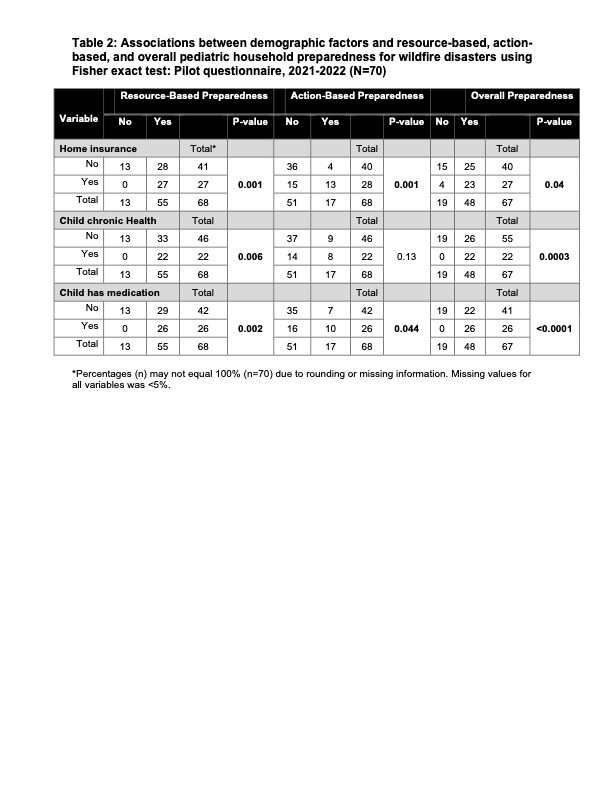