No publication has a longer association with the Academy mission of improving the health of children than the Red Book.  The Committee on Infectious Diseases was created shortly after the founding of the AAP, and the first edition of the Red Book was published in 1938.  Throughout the ensuing 82 years, the Red Book has improved the health of countless children worldwide.

The first edition of the American Academy of Pediatrics Red Book was published in 1938.  This makes the Red Book the longest continuously revised publication of the AAP, spanning 82 of its 90 years of existence.  In many ways, the story of the founding and growth of the AAP being celebrated this 90th year can also be seen in the scope, growth, and reach of the Red Book.  This remarkable publication is a reflection on the foundational strength of the Academy, namely the collaborative passions by which AAP members band together to improve the health of children across the United States and the world.  The Red Book is a Report of the Committee of Infectious Diseases (COID).  The COID is a microcosm of the volunteer nature that is the AAP, with COID members and its many liaisons continually updating the Red Book content to create a book that provides pediatric care givers with the best available information to improve the diagnosis, treatment, and prevention of the communicable diseases that afflict children in the United States and around the world.  The 2018 Red Book has been translated into Spanish, Turkish, Italian, Chinese, and Japanese, further enhancing its worldwide impact.

In 1933, a mere 3 years after its founding, the young AAP established a Special Committee on Prophylactic Procedures Against Communicable Diseases.  In 1935, this group published a 6-page report entitled “Routine measures for the prophylaxis of communicable diseases” that addressed the diagnosis and management of diphtheria, scarlet fever, typhoid fever, whooping cough, measles, smallpox, poliomyelitis, epidemic (meningococcal) meningitis, mumps, chickenpox, rabies, and tetanus.  In 1936, the AAP Executive Board created the Committee on Immunization Procedures as a permanent committee; its first members were John A. Toomey (Chair), Horton Casparis, E.J. Huenekens, Charles F. McKhann, Bela Schick, and Edward B. Shaw.  The committee report on the contemporary methods of active and passive immunity, entitled Report of the Committee on Immunization Procedures of the American Academy of Pediatrics, was published in 1938 and was provided to all AAP members.  This first Red Book addressed 18 of the most serious scourges of children at the time (Table).  Of these 18 diseases, 13 are now preventable by licensed vaccines, 3 of the remaining 5 have effective antibiotic therapies, and the final 2 have experimental antiviral therapies in development.  The diseases covered in the early editions of the Red Book also have largely been vanquished or their impact tremendously decreased.  The battle between microbe and host is unrelenting, though, and the 32nd edition of the Red Book will have 167 chapters addressing specific viral, bacterial, and fungal pathogens.  These infections include important pathogens for children and pregnant women such as antimicrobial-resistant bacterial infections, HIV, SARS-CoV-2 (the virus that causes COVID – 19 disease), Zika virus, and Ebola virus.  As these infections have emerged, Academy members and providers across the world look to the Red Book for guidance.

Over the course of the decade following 1938, Red Book editions were published largely at yearly intervals.  From 1952 through 1988, the publication intervals ranged from every 2 to 4 years.  Since the 1988 edition, the Red Book is now published on a very predictable 3-year schedule.  With the increasingly exponential expansion of medical knowledge over these decades, including the development and FDA-approval of many new vaccines, the processes required to update the now-voluminous Red Book are both complex and inspiring.  Through and under the skillful leadership of multiple Red Book editors and associate editors over the years, what started with 6 contributors in the 1938 edition has expanded to close to 500 experts worldwide serving as primary content experts; liaisons from the Centers for Disease Control and Prevention, Food and Drug Administration, National Institutes of Health, the National Vaccine Program Ofﬁce, the Canadian Paediatric Society, the Latin American Society of Pediatric Infectious Diseases, the American Thoracic Society, the Pediatric Infectious Diseases Society, the American Academy of Family Physicians, and the American College of Obstetricians and Gynecologists, among other sister societies; ex officio members serving as editor and associate editors; and of course, the 15 incredibly dedicated AAP members serving on what since 1969 is known as the Committee on Infectious Diseases (COID).  To allow for even more facile updates and reach of Red Book content, Red Book Online has been created to provide timely information on new recommendations, emerging infections, and other infectious diseases-related news of importance to providers.  So intertwined is the COID with its primary work product that it frequently is simply referred to as the Red Book Committee.  And so connected is the book with the Academy that one of the rooms in the new AAP headquarters is the Red Book Room.

Much has changed since 1938.  However, arguably even more has stayed the same.  The 1930s were at the very beginning of the scientific explosion that has encompassed the current era of pediatric medicine.  Keeping up with this onslaught is challenging, and both the AAP and the Red Book continue to rise to the occasion by harnessing the human energies and passions of its members.  What motivates these scores of people are varied, but the foundation of each is immutable:  the human desire to protect the health and well-being of children.  There is no more basic human instinct than this, and it is this love that has made the Red Book what it is for 82 years (and counting!) of the 90 years that the AAP has existed.

Table.  Chapters and Immunization Recommendations in the first Red Book 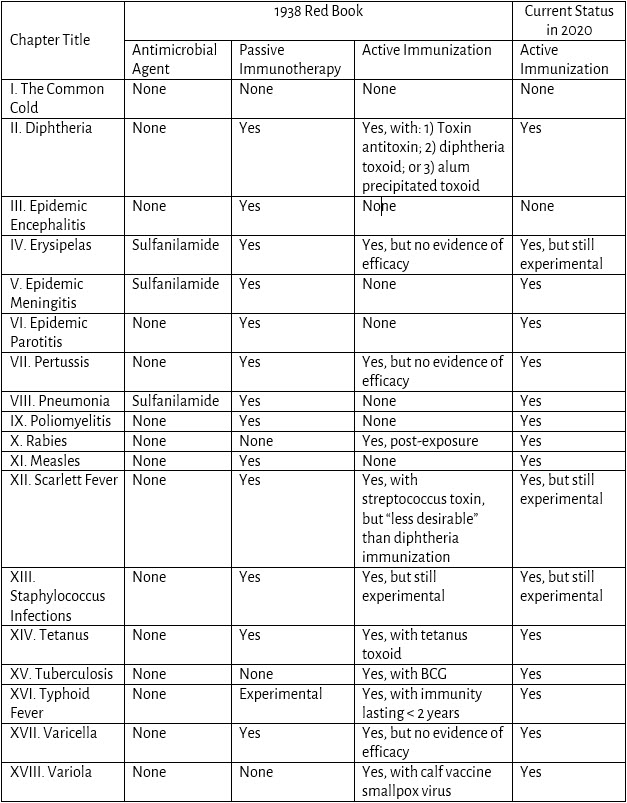